Starburst, a NetEnt powered game, has always been one of the most popular video slot games on the internet since it was launched in 2012. This game has been a fan favourite for many years now and will always be available here at Conquer Casino.

The Starburst slot game has become a favourite among players for many reasons, including its pleasant graphics and easy and entertaining gameplay. Starburst is a classic video slot game, meaning it boasts five reels and 10 paylines, making it a simple yet thrilling game that has garnered interest from players of all experience levels.

It offers a wide betting range, starting from as little as 0.10 and going all the way up to £100 a spin, so players with all budgets can enjoy this game. What’s more, the game is available to play for free without having to bet any real money. The combination of smooth and relatively easy gameplay, colourful visuals and the opportunity to win big makes Starburst a great option for both new and experienced players alike. 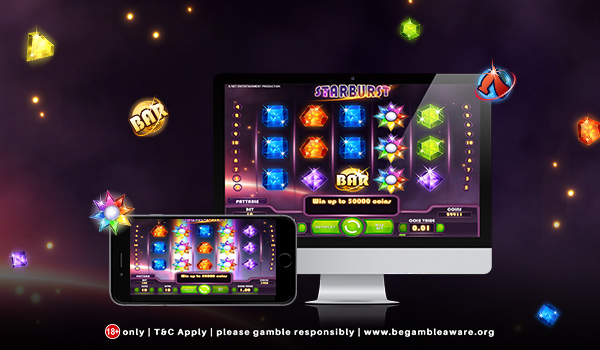 Starburst is a visually stunning game that will appeal to players of all preferences. The jewel theme gives the game a delicate and charming feel, while the rich soundtrack adds to the cosmic, out-of-this-world experience. NetEnt is one of the best software providers around, so players can only expect the best in graphics, design and sound effects. This online slot machine stands out thanks to a myriad of sparkling jewels on your screen, all in HD for your enjoyment, while the purple, blue, green, orange and yellow colour scheme makes things even more magical. The jewels represent the symbols available in the game, while you can also expect to see some traditional slot symbols like sevens and bar symbols that were standard symbols on fruit machines of the past.

While Starburst does not have a lot of special features, the ones it does have is as rewarding as can be expected. The Starburst symbol is the game’s wild and expands on the second, third and fourth reels to cover the entire reel and is held for up to three re-spins. The great thing about this feature is that you can win from left to right and from right to left, boosting your opportunity to win in a big way. This feature is activated when the Starburst symbol appears on the second, third or fourth reels. If it appears during a re-spin, that will also expand to form an additional free spin. If you see two extra Starburst wilds, it will each activate a re-spin, but if a wild doesn’t appear, the feature will end.

If you are lucky enough to land three expanding wilds, you can walk away with a cool £50,000. Most of these wins will, however, be earned in the base game. Starburst is a fun and simple game that ultimately offers players some exciting rewards with a generous RTP of 96.1%.

There are plenty of reasons to choose Starburst as your game of choice. Firstly, you can play it for free right here at Conquer Casino. Secondly, it is simple enough for even the most inexperienced players to enjoy and even win. Thirdly, it is available to play via desktop and mobile device. The list is endless. Throw in the fact that the game features excellent graphics, sound effects, gameplay and winning opportunities and it’s not hard to see why Starburst is such a favourite among online casino players.

Description: NetEnt’s Starburst continues to be a fan favourite for both desktop and mobile players. Learn more about this exciting and rewarding online slot.